Aside from bodily harm, alcohol has been linked to depression, anxiety, social withdrawal, violent behaviour, motor vehicle accidents, suicide, domestic violence and even drowning. As if that’s not enough, alcohol does unbelievable damage to the brain and liver. Pretty much every part of the body is affected negatively from excessive drinking.

From the first sip when alcohol is consumed around 33% of it get absorbed immediately into the blood, through the stomach lining. The remaining alcohol is absorbed more slowly into the blood, through the small intestine. Once in the bloodstream, alcohol diffuses into almost every biological tissue in the body because cell membranes are highly permeable. Right from that first sip alcohol affects the body, starting with the brain, what follows is an explanation of the effects alcohol has on various parts of the body….. 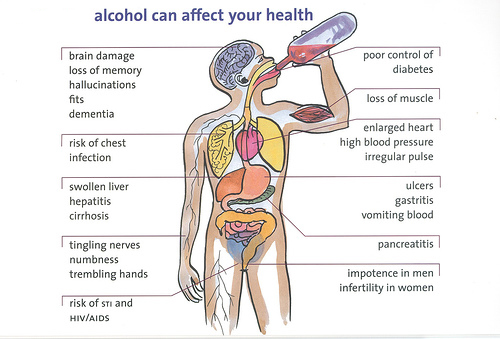 The moments you don’t remember from the wild night before – that is temporary amnesia. Keep it up and you can develop Wernicke- Korsakoff Syndrome (WKS), a memory- impairing, vision and speech affecting seizure disorder. This may mean you won’t be able to form new memories, involuntary mumbling and constant twitching eyes. Drinking also releases two naturally occurring neurotransmitters dopamine (responsible for pleasure) and GABA (responsible for calming the brain down). Too much of these neurotransmitters can lead to shortness of breath, high blood pressure, increased heart rate, delusions, hallucinations, spasms and increased levels of both aggression and depression.

The liver turns alcohol into something called acetaldehyde, which is toxic and can cause cancer. Excess drinking causes the liver to accumulate fat which can lead to fatty liver disease. A liver that has become clogged with fat cannot perform at an efficient level which affects the rest of the body. Cirrhosis of the liver can also occur when the liver cells become to damaged that they cannot regenerate. Once this has occurred if a person does not stop drinking, they will experience liver failure which is extremely fatal.

Heavy drinking can be very hard on the heart. It causes cardiomyopathy which is the stretching and drooping of heart muscle. It causes myocarditis, which is inflammation of the heart muscle and it also causes arrhythmia which is an irregular heartbeat. When alcohol is consumed, it raises blood pressure and blood lipids. This increases the risk of heart attack, hypertension, raised cholesterol and stroke.

Excessive drinking can accelerate the rate of bone deterioration and increase the risk for bone fracture and osteoporosis. Calcium is important for strong, dense bones and when alcohol is consumed it acts as a diuretic and flushes calcium from bones making them weaker and more susceptible to fracture.

Alcohol affects the central nervous system causing short- term effects like slurred speech, blurred vision, weakened muscles, decreased reaction time and impaired memory. When alcohol is consumed excessively, it can cause cell damage in the central nervous system creating a condition known as neuropathy. This causes alternating feelings of weakness, burning pain and numbness in the feet and hands. 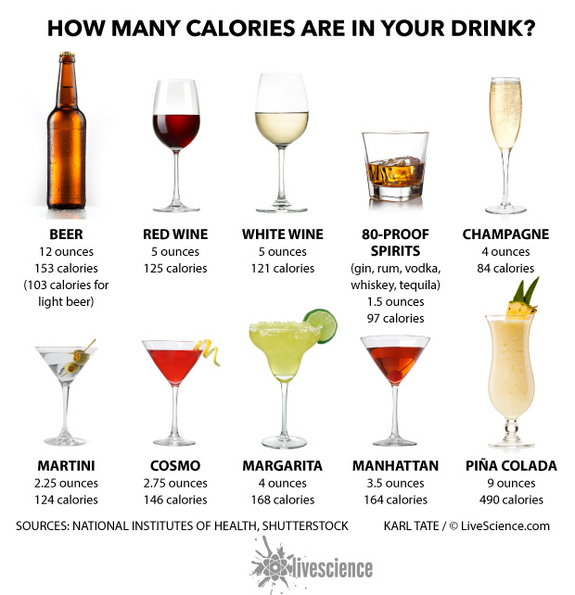 In conclusion, alcohol is not friendly to the body. While your mind may find its effects fun, your body does not. So try not to over do it and if the habit grows or your find yourself having a hard time stopping after just one glass, the cumulative effects can seriously add up.